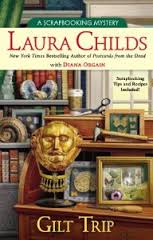 Diana Orgain signed with Berkley Prime Crime to co-author the next two books in the in the NY Times Bestselling Scrapbooking Mystery Series with Laura Childs. The first of these books, GILT TRIP, will be published in October 2013.

Michelle Gagnon’s Young Adult technothriller DON’T TURN AROUND was nominated for a Thriller Award in the Young Adult category by the International Thriller Writer’s Association. It was also selected as one of the best YA books of the year by Entertainment Weekly Magazine, Kirkus, Voya, and YALSA (the Young Adult Library Services Association); and was chosen for teen reading lists in Texas and Florida. DTA is also a finalist for the Black Eyed Susan Award in Maryland.