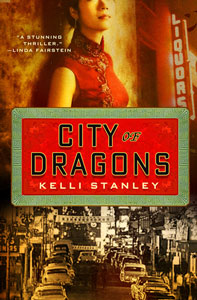 CITY OF DRAGONS by Kelli Stanley is nominated for a Macavity Award (Sue Feder Memorial Historical Mystery Award); the winner will be announced at Bouchercon. The trade paperback will be released on August 30th.

CITY OF SECRETS launches September 13th. Launch party is 9/13 at M is for Mystery!

“Memory Book”, an original Miranda Corbie short story and prequel to both CITY OF DRAGONS and CITY OF SECRETS, is going to be published on September 6th on The Criminal Element and will be available as an e-book for .99.